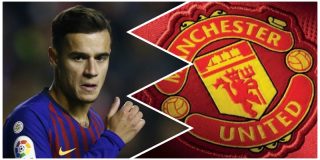 Manchester United have been linked with a shock move for former Liverpool midfielder Philippe Coutinho.

It’s only the beginning of the January transfer window and this rumour will take some beating in the most ridiculous category.

Anyhow, a report emerged on Monday via The Express suggesting Barcelona star Coutinho had been the topic of talks over a blockbuster deal involving the Old Trafford club.

The Brazilian has been hit and miss for Barcelona since he left Merseyside, with competition fierce at Camp Nou. Coutinho is up against the likes of Lionel Messi, Luis Suarez, Ousmane Dembele and Malcom for a starting role.

Rubbishing the report, Manchester Evening News did a good job.

United are working on appointing a director of football and full-time manager, so why would they go out and sign a playmaker when a centre-back is desperately needed?

It just doesn’t add up.

The story went hand-in-hand with Barcelona’s 2-1 win over Getafe at the weekend, with Coutinho on the bench from the start. Surely a build-up of frustration can only lead to a drastic switch to United?

Even if Coutinho wanted to leave and Barcelona wanted to sell, there is nothing to suggest a move would appeal to United. The 26-year-old is an exceptional talent but not what the Reds need.

He doesn’t start ahead of Anthony Martial on the left wing, where he would compete with Alexis Sanchez as support, while Paul Pogba is playing his best football yet in a Red shirt on the left-side of midfield.

The MEN also raise a very good point: Liverpool also get financial benefits from any such resale and any transfer fee would indirectly be funding Jurgen Klopp’s title charge this season, no thanks.

It’s a definite no from us…