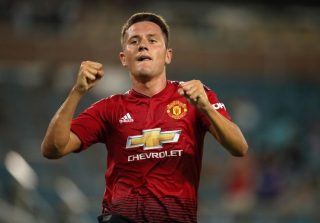 Ander Herrera is in line to sign a new contract at Manchester United.

The Spanish midfielder’s current deal expires at the end of the season and he is permitted to negotiate with foreign clubs this month ahead of a potential transfer.

The Sun understands that Herrera is ready to commit his future to United after being persuaded by Solskjaer, though the former Athletic Bilbao man has never looked like wanting to leave Old Trafford.

Solskjaer probably just made it clear to Herrera that he has a future at the club, therefore, is valued as an assist to the squad by the Norwegian coach.

Perhaps that fear goes out the window when the biggest club in world football offers you a new deal?

Unless fresh terms are agreed between now and the end of the season, Herrera will walk away for free in the summer. A one-year extension was triggered last year while José Mourinho was manager.

ESPN took a look at reported interest from Barcelona in May. Herrera had a good working relationship with Barça manager Ernesto Valverde at the San Mamés Stadium.