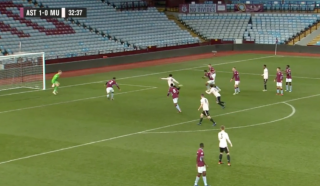 Manchester United U23s are in action tonight, away to Aston Villa in the Premier League 2.

Going into the game knowing a win can take them back to the top of the league, conceding an early goal 13 minutes in came as a blow.

But the Reds have struck back through Nishan Burkart, the scorer of United’s equaliser.

You could say the goal was fortunate given how the ball got through to Burkart, but the young lad does well to finish and keep United in the game.

Ricky Sbragia’s youngsters are currently five points ahead of Villa in the league, despite beating them in the reverse fixture 3-1.

United are without Angel Gomes, Tahith Chong and James Garner with the three youth players away in Dubai training with the first team.

It would be great to see this group of players win without so may key names in the squad, especially to show they have the depth to go all the way this season.

With Villa close in the table, a result tonight would help bridge a gap between us and other challenging sides.