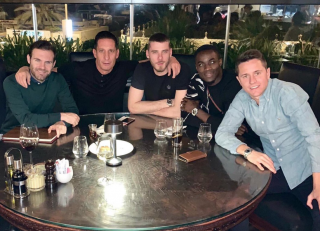 The Manchester United squad is in Dubai for a warm-weather training camp.

While we’re no experts, it’s still winter in Manchester so we’re unsure what benefit this will have on performances but perhaps Ole Gunnar Solskjaer is looking to lift morale within the team even more.

Old Trafford is a happy place again since his appointment as caretaker manager. The players are smiling and expressing themselves on the pitch, and United are on a 5-game winning run.

After the FA Cup third round victory over Reading on Saturday, the players flew to the Middle East for their break, though Paul Pogba was left behind to fully recover from a knock he picked up in the 2-0 win over Newcastle, as reported by the Manchester Evening News.

Solskjaer will hope the Frenchman will be ready and fit enough to take on Tottenham at Wembley on Sunday, when the Reds take to the pitch in competitive fashion again, seeking another three points to make their way back into the top four.