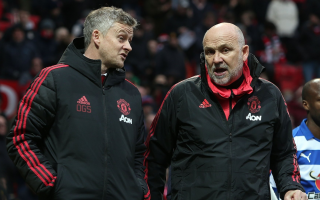 Ole Gunnar Solskjaer has everyone smiling at Old Trafford again but his decision to bring Mike Phelan back to the club has been a masterstroke.

Phelan immediately returned to United when Solskjaer was appointed caretaker manager and his presence has been felt around the club.

The Norwegian coach deserves his plaudits for turning things around so quickly after José Mourinho was dismissed on December 18, but Phelan’s influence shouldn’t go under the radar.

Sir Alex Ferguson’s former right-hand man should never have been pushed out of the club by David Moyes. He understands what it takes to make it as a United player, to work with a manager who only accepts the highest standards and how to implement the true values of the club.

He became part of the furniture. Even Albert The Kitman had to wash his shorts for match day, though we’ve yet to see them since his return to the Theatre of Dreams dugout.

“That’s the info we’re giving them, what it means to play for United. It’s not acceptable just to be bang average, you’ve got to be more than that.”

Some fans have started crediting Phelan for recent results and performances via Twitter, as seen below:

How can anyone not like @Mike_Phelan_1 back at the football club. Genuinely nice guy and a highly underrated coach.

Phelan was a loyal assistant to Ferguson, working closely with the legendary boss for 12 years from 2001 to 2013 as United won 12 major trophies. pic.twitter.com/iYYMN0zctL

This is what Manchester United are all about.

This guy needs to stay at united beyond this season

If David Moyes had of kept Mike Phelan at the club things would have turned out so different. #MU #FaCup

Out coach is actually Mike phelan. If you know, you know.