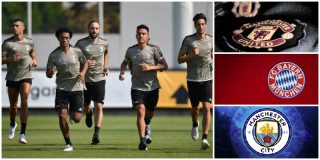 Paolo Dybala has been linked with a move to Manchester United all season and Tuttosport claim there is also interest from rivals Manchester City.

Back in November of last year, the Juventus attacker told the Mirror that reported interest from the Reds will not distract him despite wanting to play alongside former teammate Paul Pogba again. The pair enjoyed a period together in Turin before Pogba returned to Old Trafford in 2016.

“I’m not thinking about the transfer market,” he said. “Right now I’m really happy at Juventus, and the focus is simply winning all the titles here.”

Well, it’s transfer season again for at least a month. While it’s unlikely a signing of this magnitude will take place between now and February, we can expect this stage to run into the summer with Bayern Munich and Paris Saint-Germain also said to be monitoring the situation, as per The Express.

The Argentina international has been at Juventus for four years and is becoming one of the most sought-after attackers in world football, though it has took time for the forward to break into his national team.

Dybala has won all there is to win with Juventus except a Champions League. The Italian giants sealed the signing of Cristiano Ronaldo during the summer to go a step closer to making that a reality this season, though United had enough to come from behind and beat them at the Allianz Stadium in this season’s group stages.

According to the Daily Mail, Dybala is currently valued at £90 million which is slightly more than what United paid for Pogba. It’s a significant amount and suggests how highly he is rated by Europe’s biggest clubs with Bayern, PSG, City and, of course, United all reportedly showing interest.

The Daily Mail claims Dybala joined Juventus from Palermo in 2015 for £23 million – making a potential recoup of £90m an extraordinary profit, and that is the level of recruitment we should be demanding at United.

No wonder Juventus have finished runners-up in the Champions League twice in the last four years.

It may come as a surprise not to see clubs such as Barcelona and Real Madrid linked with Dybala. Especially when you consider all the speculation surrounding Isco’s future at the Bernabeu, with Calciomercato linking Juventus with the Spanish international…