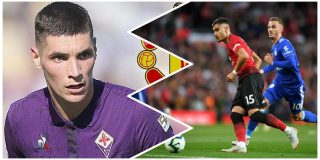 Serie A outfit Fiorentina are trying to sign Manchester United midfielder Andreas Pereira, according to reports.

The news was brought to our attention by Sport Witness, a brilliant website that translates foreign reports on all football matters. They sourced this update on Andreas Pereira from Florence based newspaper La Nazione.

Pereira fell out of favour under José Mourinho this season and looks unlikely to suddenly become a regular under caretaker manager Ole Gunnar Solskjaer after a below par performance against Championship fodder Reading on Saturday.

The 23-year-old’s current deal at United will expire in the summer and The Mirror speculate he could join Arsenal or La Liga outfit Valencia on a Bosman.

However, the report from La Nazione contains an interesting nugget which makes a great deal of sense.

United desperately need to strengthen at the back and one name linked with a move to Old Trafford is Fiorentina’s Nikola Milenjovic, as per The Sun, as fans become tired of watching Chris Smalling and Phil Jones at the back.

The report from Italy suggests United will try to push Pereira to Fiorentina in attempt to boost relations with the Serie A club ahead of a move for the 21-year-old defender.

It is hard to imagine Pereira having much of a future at United, so if he’s to leave why not swing it in our favour by adding a promising defender to the squad? Even at that, Ed Woodward should be looking to sign a world-class centre-back with experience like Kalidou Koulibaly.