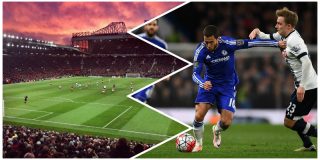 Mauricio Pochettino has been heavily linked with the Manchester United job since José Mourinho’s dismissal on December 18, and the Tottenham manager has yet to commit his future to Spurs amid speculation.

That suggests the Argentine coach doesn’t want to rule out the possibility of moving to Old Trafford at the end of the season. He’s done a terrific job with Spurs to make them a Champions League side, although some will be critical of his failure to deliver trophies.

It remains to be seen how much of a candidate Ole Gunnar Solskjaer will be when the season concludes. He’s won five games out of five as caretaker manager, but this weekend throws up the first real test of his reign…

Spurs away. A showdown with Pochettino.

That fixture will show exactly how far United have come during this brief period under Solskjaer. He’s only had a couple of weeks with these players, but we couldn’t ask for more from our former striker.

Of course, it would come as a blow to Spurs supporters if they lost Pochettino at the end of the season, but what if a star player was to follow suit?

According to Miguel Delaney of The Independent, Real Madrid have made steps to sign Christian Eriksen this summer, with preparations underway to make a £100 million bid for the Denmark international. It is thought that the Spanish giants want one of Eriksen or Chelsea’s Eden Hazard.

Both players see their current deals expire in 2020, so if Pochettino is to leave Spurs this summer surely there’s a chance he can persuade Eriksen to follow him to Old Trafford? He’s one of the best creative players in the world and Madrid’s interest is enough to suggest that, especially if it’s between him and a player of Hazard’s quality.

The Independent’s report continues to state that Eriksen’s wishes to leave Spurs are not financially related.

At 26, Eriksen could still leave Spurs and play in his prime for one of the world’s biggest clubs. He may prefer sunny Spain and Daniel Levy will do his utmost to stop another Premier League side getting him, but you don’t get unless you ask…

The Reds should definitely chance their arm and rival Madrid by bidding for the Dane this summer, and the potential arrival of Pochettino may turn his head in United’s favour.

There aren’t many playmakers I’d rather have than Eriksen with Juan Mata turning 31 in April.