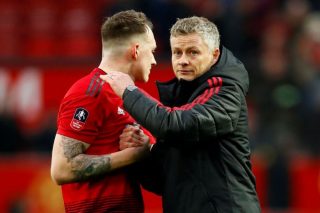 Phil Jones is wary of not getting too carried away after an excellent start under Ole Gunnar Solskjaer.

Manchester United have won 5 games from 5 under Solsjkaer, who is the first manager since Sir Matt Busby to win his first 5 matches for the club. But Jones is aware that the side has not achieved anything yet. United have yet to face a top six opponent yet under the interim boss, securing comfortable victories over Cardiff, Huddersfield, Bournemouth, Newcastle and Reading.

“We have not done anything yet, we have not achieved anything but we need to keep it going,” said Jones as per The Independent.

The United defender suggested the Spurs game will prove if any real progress has been made so far in Solskjaer’s reign.

“Possibly Spurs will be an indicator for us and how far we can go but it is a game we need to win.

“They are in good form and doing well and we need to have a good week, train well and prepare for a tough game. Hopefully the momentum can carry us on to win that match.”

A win for United would put them right back in the hunt for the Champions League places, but Jones made it clear not to look too far into the future.

“Of course we should be in the Champions League next season and that is the aim but we have done nothing yet and I know it is a cliche but it has to be game-by-game.

“I don’t really want to think about the top four, or the Champions League or the FA Cup, it has to be game-by-game. Tottenham is tough and we need to see where we are after that,” said Jones.

The United squad are currently enjoying a week’s warm weather training camp in Dubai ahead of Sunday’s crucial game against Tottenham at Wembley.

Jones has had a resurgence in form himself since Solskjaer has taken over, forming a relatively successful centre back partnership with Victor Lindelöf. However, United’s defensive frailties still remain and  the club are still reportedly on the look out for a new centre-back.

United have been strongly linked with highly rated Napoli defender Kalidou Koulibaly in recent days, but have suffered a setback in their pursuit for the Senegalese international who is now set to stay at Napoli this month according to Italian journalist David Amoyal.

Meanwhile, another Serie A centre back, Kostas Manolas has also been linked with a move to Old Trafford. The Roma defender reportedly has a €36 million release clause as per Sky Sports ,which becomes active in the summer, and would be a much cheaper alternative to Koulibaly.