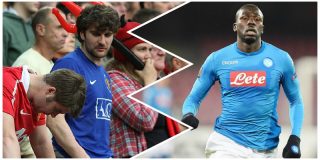 Manchester United have been handed a blow as Kalidou Koulibaly looks set to stay at Napoli this month, according to Italian journalist David Amoyal.

The Senegal international is one of United’s defensive targets, with the squad in dire need of improvement at the back, and The Express even ran a line that Koulibaly could move to Old Trafford in January.

Former manager José Mourinho wished to address the defence last summer, but was not given the backing he wanted by Ed Woodward and the board. The Portuguese tactician would argue a signing of Koulibaly’s quality would have seen United start the season stronger and lessen the likelihood of his dismissal halfway through the season.

As a result, the Reds will probably go into next summer’s transfer market with a rock at the back. Everyone can see the difference Virgil Van Dijk has made at Liverpool and now we need our very own leader in defence.

“Look, a lot can change in the summer. Koulibaly’s now right smack in the prime of his career,” Amoyal told The Calcioland podcast.

“I think in the summer, there’s probably no better time to sell, let’s see what happens.

“But I think in January there’s no formula that he’s gone and if I have to bet now, I bet he stays next season too.”

Well, that’s certainly a blow for anyone who wants United to sign Koulibaly.

We ran a piece on Koulibaly over the weekend about his brilliance and what he’d bring to the team.

With Phil Jones and Chris Smalling this at United, playing games when fit, a signing of Koulibaly’s standard would be huge. It may even benefit the development of Victor Lindelof, who has done well lately, and Ivory Coast international Eric Bailly.

Koulibaly is also a player most managers would love to work with, so unfortunately it doesn’t look like we can boast about having one of the best defenders in world football when approaching a new boss, like we can with David de Gea in his position as goalkeeper.