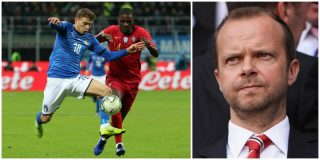 A shrewd businessman tasked with making football-related decisions, the executive vice-chairman at Manchester United has reportedly come up short again.

According to Corriere dello Sport, translated by Sport Witness, United made an offer for Cagliari’s Nicolo Barella three days ago prompting a rejection from the Italian club because it doesn’t meet their valuation of the player.

The report suggests a ‘collaborator’ made an offer for the 21-year-old but not enough to convince the Serie A club to sell. It is claimed that £30 million was offered with a take it or leave it stance from the Premier League giants, while it is thought the Italian outfit are holding out for closer to £45-50 million.

Rejection would suggest they are demanding more money for one of their most prized assists, although The Evening Standard believes Chelsea are lining up a move for the midfielder as they seek a replacement for Cesc Fabregas, who appears to be on his way to AS Monaco, as per Goal.

It remains to be seen whether Barella is a target United will closely follow over the remainder of the season, with a director of football and full-time manager expected to be announced before the 2019/20 campaign.

Even though midfield signings like Paul Pogba, Nemanja Matic and Fred have been added to the United squad in recent years, it would be nice if we really strengthened with a midfield capable of outrunning others and winning physical battles.

Cagliari are positioned 13th in Serie A.