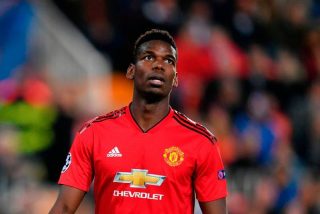 The World Cup-winner completed 90 minutes at St. James’ Park on Wednesday night but a horrific challenge by Jonjo Shelvey saw Pogba pick up a knock which ruled him out of yesterday’s cup fixture.

Shelvey escaped a booking for his horrendous lunge on the Frenchman, but it’s Pogba who misses out. The FA decided not to act against the Newcastle midfielder despite his recklessness and Andre Marriner’s carelessness. Daniel Taylor of The Guardian sums up it brilliantly and calls for a second look on such incidents.

It was clear when photos emerged of the squad travelling to Dubai that Pogba was nowhere to be seen, but the club have since offer clarification on the matter.

A statement on ManUtd.com read: ‘Paul Pogba has not completely recovered from the knock he sustained against Newcastle and stayed back for treatment, but he will join his Manchester United team-mates in Dubai soon in preparation for the Tottenham game.

‘The midfielder has been in impressive form of late and claimed the player of the month award for December, as voted for by fans, after registering four goals and four assists.

‘The squad travelled to Dubai after Saturday’s 2-0 FA Cup win over Reading at Old Trafford for a training camp ahead of the Reds’ next Premier League outing, against Tottenham Hotspur at Wembley Stadium next Sunday, 13 January. ‘

It makes sense to keep Pogba behind in Manchester until he is fully recovered from the knock. We need him firing in all cylinders next Sunday.

The match against Spurs is a big one; Solskjaer’s first real test as United manager and he will need his main man back fit and ready to create dangerous situations against our top four rivals.

It may even be built up as a managerial showdown with Solskjaer clearly wanting the United job on a full-time basis and Mauricio Pochettino being tipped as the club’s preferred choice, according to a report in The Express.

The quicker Pogba returns the better.