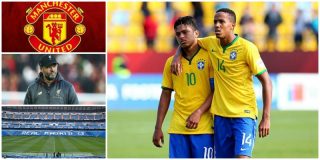 Manchester United and Liverpool have both been strongly linked with a move for FC Porto’s highly-rated centre-half Eder Militao.

According to The Mirror, the Brazilian defender is available at £42.5 million due to a clause in his contract. He cost Porto just €4 million after joining from Sao Paulo in the summer, as claimed in a report by The Metro.

The 20-year-old continues to impress in the Portuguese league and Marca claim Real Madrid have also kept an eye on the defender. That would suggest whoever signs him next will have a fight on their hands to shield off interest from elsewhere…

And with interest gathering, Porto are probably sorry they didn’t put a bigger clause on Militao’s contract despite only joining the club in the summer.

He became a Brazil international in September 2018 and has since been linked with a host of other clubs, which is enough to suggest he is ticking all of the boxes since arriving in Europe.

The Express suggest Jurgen Klopp would like Liverpool to sign Militao this month to bolster his squad for the title race. His side has improved significantly in defence this season with Virgil Van Dijk and Alisson Becker showing their importance in the side, but adding the young Brazilian to the mix may prove beneficial to the German coach.

Meanwhile, Ole Gunnar Solskjaer is in a crossroad situation as interim manager. He claims to have an influence on signings but behind the scenes Manchester United may be working differently to ensure everything is prepared for a director of football and new manager.

Militao’s agent Ulisses Jorge spoke about his client’s future and claimed Chelsea and Barcelona, as well as United, have previously expressed interest during his days at Sao Paulo.

“All these clubs already had interest in Eder when he was at Sao Paulo,” Jorge told Portuguese newspaper O Jogo, translated by the Manchester Evening News back in December. “Since the player moved to FC Porto, nobody came to me.

“Eder is very calm, he is happy at Porto and he is not thinking about anything other than Porto.”

Though signing a top centre-back is needed either now or in the summer. The club should act if one is available now or if the scouts feel Miliato is worth £42.5 million?