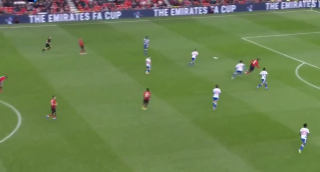 Romelu Lukaku has now scored three goals in as many games under Ole Gunnar Solskjaer.

The Belgian doubled Manchester United’s lead over Reading just before the half-time whistle.

He bounced off the bench and scored in each of the last two Premier League games and has continued his form in the FA Cup against Reading.

A tough goal to concede for the visitors but you can’t keep making mistakes against top players. They’ve had to learn that the hard way as a comeback seems very unlikely at this point.

United weren’t great by any means with the midfield looking very light and Fred giving the ball away time and time again. The Brazilian had a goal ruled out for offside but VAR saw United awarded a penalty, which Juan Mata slotted home.

The second-half should see some changes but we’re unsure Solskjaer will pull the trigger too soon. This is an opportunity for a number of fringe players such as Andreas Pereira to prove themselves. The rest of the lads have played a lot of minutes over the Christmas period.