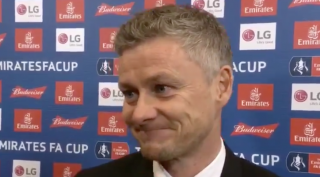 Ole Gunnar Solskjaer has warned his Manchester United players they must improve on their performance in the 2-0 win over Reading to have any chance of beating high-flying Tottenham next weekend.

United earned a spot in the fourth round of the FA Cup with Juan Mata and Romelu Lukaku both getting in on the scoring but the performance was far from spectacular.

Mata broke the deadlock with a spot-kick awarded via VAR. The referee initially disallowed a goal for offside, but the latest technology to take football by storm saw an incident prior to the offside pass that signalled a penalty in United’s favour.

United’s lead was doubled on the brink of half-time as Lukaku converted a calm finish, thanks to a stunning assist by Alexis Sanchez.

The Reds will now jet off to sunny Dubai for a training camp prior to facing Spurs in the Premier League, which will prove to be Solskjaer’s toughest test yet as United manager.

“We’re going to have some days to recover and train hard,” Solskjaer told BT Sport after the match, as quoted by The Metro.

“If that performance is repeated at Wembley we’re not going to get a clean sheet.”

That said, Solskjaer made plenty of changes to his side and the defence looked like football’s answer to Russian Roulette before the game.

Thankfully it was a matter of Reading not having enough quality to take advantage.