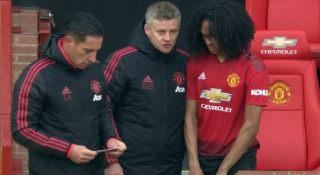 Ole Gunnar Solskjaer handed a first debut to Manchester United youngster Tahith Chong in the 2-0 win over Reading in the FA Cup.

The caretaker manager brought the 19-year-old on to replace goalscorer Juan Mata after the hour mark to become the club’s 229th academy graduate to play for the first-team.

It was an incredible occasion for the lad, who has been performing superbly in the youth teams all season, and Solskjaer clearly felt he deserved the call-up.

Chong received a warm reception from the Old Trafford faithful and a new chant did the rounds with his name. ‘We’ve only got one Chong’ came from the L Stand in high volume.

Although the Netherlands youngster was booked for a foul, Solskjaer was pleased with his contribution on the pitch.

“He had two or three really good moments, as you do when you’re young,” Solskjaer said, as quoted by the Manchester Evening News.

“You don’t run the game as a first performance for a 19-year-old.

“But he got the crowd going, and has shown one or two glimpses of what he can do, he has in training anyway. And the game wasn’t won, it was 2-0 and was still go out there and perform. It’s not like it was 4-0 and it’s just a pity, so he did well defensively as well and I think he’ll remember this for a long, long time.”

There won’t be many happier 19-year-olds in Manchester this evening.

Chong will be buzzing after seeing the majority of Old Trafford on their feet singing his name. It’s what we’ve all dreamed about as United fans.

What were you doing at 19? I’ll guess and say NOT playing for Manchester United.