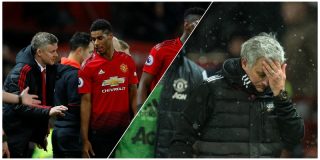 There was a defining moment in the 2018/19 season where I drew a line under the idea of Marcus Rashford ever being a reliable centre forward of the required calibre at Manchester United.

We were 2-0 down to Newcastle at Old Trafford. Next goal was key if we were to stand any chance of getting back into the game. A rarest of rare things happened…. a beautiful cross was whipped in beautifully from the right-hand side. Our centre forward for the day rose unmarked 6 yards out and somehow headed the ball wide.

Sky Sports pulled no punches in capturing the pain on Rashford’s face as the realisation he’d missed struck him.

For me it was just confirmation that for all his pace, desire and energy, he was just too lacking in composure at key moments to be the goal scorer we need him to be.

This belief was only reinforced by how United turned the game round and won it after he was substituted.

In those final weeks under José, like most of his colleagues, he looked lost. He had about as much confidence in his ability as a vegan has bacon in their fridge. Fulham at home aside, (which was like shoot retarded fish in a really small barrel) he looked to be out of ideas.

So colour me a highly camp shade of surprises at how quickly and impressively Ole has managed to change this young man’s approach to the game, and most importantly, the confidence and composure he plays it with.

Yes, it’s been 4 games. Yes it’s been Cardiff, Huddersfield, Bournemouth & Newcastle, but we’ve seen young Marcus and many of his teammates struggle against such opponents in recent months.

What we’ve seen in this young man, and many of his teammates is a considerable improvement in both their belief in their value as a member of the United team, and the end product delivered as part of the team.

These recent performances themselves do not eradicate all fears of the lads failings. Not by any means. But these changes in his approach to the game. How he is consistently delivering an end product once his raw pace has left a defender for dead is creating game changing chances and goals for team mates.

His finishing is now showing a level of composure that has been severely lacking earlier in the season.

He’ll need to carry on doing these things consistently to truly deliver on his incredible potential, but I’m much more hopeful of him doing this than I was towards the end of José’s time at United.