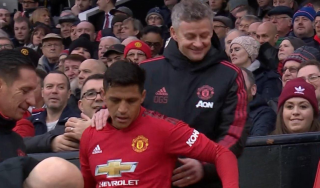 Please say the latest knock picked up by Alexis Sanchez is not too serious!

Only returning from a long spell out with injury, Sanchez was substituted off after the hour mark against Reading in the FA Cup.

It looks like he had strained a muscle and asked to be replaced before accidentally sitting in the manager’s seat.

Ole Gunnar Solskjaer was left with no other choice but to politely ask his injured star to move seats.

Sanchez was replaced by Marcus Rashford as United’s third substitution. Marouane Fellaini and Tahith Chong have also come on.

He looked to be in some pain, so we’re expecting Solskjaer to pass comment on it after the match in his press conference.

See the picture below of Solskjaer reminding Sanchez to get out of his seat.

The Reds are currently beating Reading 2-0. Next round, here we come!