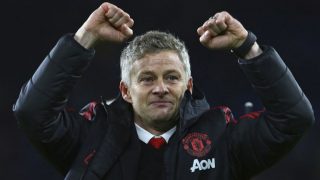 It has been a whirlwind eleven days and a real baptism of fire for our new boss. Fours wins out of four and this man and his backroom staff deserve more credit than they are currently getting.

Skeptics will point out the opposition were the right ones at the right time but we have certainly had favourable fixtures in the past and struggled.
Fourteen goals and three conceded in those four matches without any real wholesale changes to the starting 11. That is quite an achievement considering where we were nearly three weeks ago at Anfield.
There is an undoubted freshness and a freedom with the way we play now. The front three have been let loose and the results speak for themselves.

What’s happening now seems like exactly what the fans have wanted and been crying out for for years now.
Martial and Rashford’s pace all around the attacking areas is causing havoc. We have only seen controlled glimpses of their attacking threat under past management. Previously, the team looked too scared to be creative and it seemed like they were focused on where they were tactically on the pitch rather than where they should be.
It’s too simplistic to say Ole has just let the forwards do what they want.
The focus has been on interchanging positions and making runs in behind to stretch opposing backlines.
When Rashford plays as the central striker his runs in the channels and coming deep to receive the ball have given our attack another dimension.
On Wednesday night at Newcastle his sharp movement and physicality gave Jamaal Lascelles a very hard 90 minutes.
The Toon defender tried to kick Rashford out of the game but he and United are made of sterner stuff these days.
The other noteworthy difference on Wednesday night was the inclusion of Juan Mata.
The little Spaniard had the freedom of the St James’ Park and as a result Ander Herrera was deployed as cover on United’s right hand side.
Christian Atsu was The Toon’s only threat from that side but it was a relatively comfortable evening.
Usually both full backs have been pushed forward by Solskjaer but it shows a flexibility in our play that is encouraging to see.
The big call The Boss got spot on in the week was his double substitution at 0-0.
Taking off Mata and Martial was a risk for the Norwegian.
Mata had been playing quite well but the decision to take off Martial, with his recent goal scoring form this season, might have raised some eyebrows.
We all know what happened next and it’s hard to not think how Jose Mourinho would have handled that situation.
Our big plan B under the Portuguese would have been Fellaini and long ball after long ball would have been pumped in to the box.
From the inevitability of United games petering out to another disappointing performance the change to an exciting offensive display is very welcome.
At 2-0, United brought on Jesse Lingard for Marcus Rashford. Hardly a manager that was trying desperately to get his first clean sheet.
The message was loud and clear. Manchester United are not a team that is going to cling to a result. It is not our strength to see out a game by making defensive or desperate attempt to win a game.
Matic and Lindelof look like different players now and have led by their dominating roles in their position.
Lindelof is going to be key in the next few weeks with Rojo, Smalling and Bailly missing for various reasons.
The Swedish player of the year has really blossomed in the last couple of months.
Adjusting to the Premier League has taken longer than anyone hoped and for a while he seemed like a lost cause. Lindelof was one of only a select few to come out of the Mourinho era with any credit and long may it continue.
I know this is an unpopular opinion but I think we need someone like Nemanja Matic on form.
As I said in my previous post, the position he plays is so important to the way we want to attack. Fred started against Huddersfield and was hauled off early in the second half. The Brazilian is still trying to find his feet and form in Manchester so in the mean time Nemanja is the best option.
Ander Herrera has struck up an important partnership in midfield with The Big Serb and it’s proving to be the foundation our offensive play needs.
For myself, I keep waiting for all this positivity to come crashing down. We have been programmed in recent years to expect this. A creeping doubt left over from Jose’s version of this squad hangs in the air.
United have bigger tests to come and Spurs away the weekend after next is the biggest test of all.
Ole Gunnar Solskjaer Vs Mauricio Pochettino.
Ole will see that game as a personal battle against his rumoured rival for the job.
It is no secret that The Reds have targeted Pochettino and what a turn up for the books it would be if our caretaker boss gets one over our rumoured future one? How will that change the club’s thinking going in to summer?
Of course one result isn’t going to change that but it puts a different spin on the whole situation if United some how finish above Tottenham. It is not likely but in a short time, the dark cloud over the club has lifted slightly and for now;
‘You are my Solskjaer, My Ole Solskjaer, You make me happy, When skies are grey, Oh Alan Shearer, Was ******* dearer, So please don’t take my Solskjaer away…’