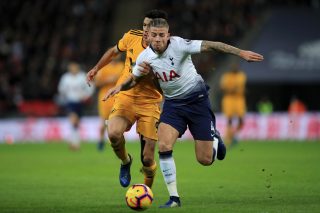 Tottenham defender Toby Alderweireld has signed a contract extension to activate a £25 million release clause in his deal, potentially enough to reignite Manchester United’s interest in the Belgium international.

It has been confirmed by Spurs on Twitter that the club has activated the option they had to tie Alderweireld down at the club until 2020.

But it comes with the risk of losing Alderweireld for as little as £25m this summer, as reported by ESPN, who add that the Reds have previously been interested in the defender.

José Mourinho made it clear after the summer transfer window that he wasn’t overly satisified with the club’s recent transfer activity. He wanted a centre-back and Alderweireld was among the defensive targets he put in place.

The proof is in the pudding as United have conceded 32 goals in just 21 Premier League games this season, so a solid defensive addition now would benefit caretaker manager Ole Gunnar Solskjaer and his quest for top four.

We’ll have to wait and see if United plan to make a move for Alderweireld.

He would be the ideal quick fix but fans may want something a little more long-term, though we already have that in Lindelof, who has been performing well of late.

The Club can confirm that we have activated the option to extend @AlderweireldTob’s contract until 2020.