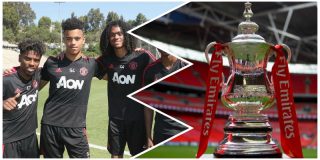 The Reds face the Royals at the first FA Cup hurdle for the second time in three seasons as Ole Gunnar Solskjaer looks to maintain his faultless start as interim Manchester United boss with victory in Saturday’s lunchtime kick off at Old Trafford.

In-form United will start as red hot favourites against the Championship strugglers and Ole is set to make a whole raft of changes including starts for recent sub Romelu Lukaku and the fit-again Alexis Sanchez.

Like United, Reading are also under the tutelage of a new man having made a managerial change after a poor start to the season. Jose Gomes is the new boss in the hotseat and here is our predicted XI for the cup clash against his Berkshire men.

Spanish Dave’s solid and more than capable cup deputy. Opportunity knocks for the Argentine stopper who looks set for a third start of the season having lined up against Derby and Valencia this season. Shouldn’t expect to have too much to do against a side firmly entrenched deep in the second-tier relegation zone.

The young full back’s United career has been a slow burning one but following Antonio Valencia’s troubles on Tyneside, Dalot surely must get the nod for this one. Ashley Young will be rested with Tottenham in mind so Dalot should get another chance to build on his brief but impressive set of showings in this one.

Chris Smalling and Marcos Rojo are still injured and Eric Bailly suspended, so there really is no one else to go into the centre-back spots unless Ole throws a curveball and brings in an Academy player such as highly-rated defender Ro-Shaun Williams. Lindelof has continued to go from strength to strength whilst Jones remains a Jekyll-and-Hyde footballer. Ole will likely go with a mix of youth and experience and looks set to stick with his tried-and-tested defensive unit.

Yet to feature under Ole, this is an ideal opportunity for the wantaway Italian to play his way into Solskjaer’s plans. Having slipped down the pecking order due to Jose Mourinho’s departure and Luke Shaw’s resurgence, Darmian is likely to get a rare run out with both Shaw and Ashley Young rested. Either a chance to show that he does still have a United future, or a shop window opportunity for any potential January suitors

According to Sky Sports, Paul Pogba could miss the Reading tie after he picked up a knock against Newcastle. Pogba may well have been rested anyway but Solskjaer’s hand is set to be forced. Marouane Fellaini is most likely to deputise in the Frenchman’s absence, the Belgian having played only three minutes under Ole. Andreas Pereira could play instead, but we think Fellaini will get the nod.

The Brazilian’s United career has yet to really get going after his much-feted £52m summer move from Shakhtar. Ander Herrera has become first choice and Nemanja Matic desperately needs a breather. Both will likely get it against Reading. Fred has impressed when he’s been given the opportunity to do so and will be champing at the bit to do so again. Started in the Boxing Day win over Huddersfield but got taken off early in the second half as he was not match fit.

Surprisingly rested on Wednesday at St James’ Park, Lingard is set to be restored to the right-wing role against the Royals. It’s always hard to predict a United team for ties such as this, but United always look better with Jesse’s pressing, energy and industry. A product of the Academy himself, Lingard could be displaced by one of the next generation with this game an ideal chance for the likes of Tahith Chong with Solskjaer to make “a few” changes to the team.

I am sure there will be at least one of the current crop of United kids involved in this game and Gomes, fresh from his Christmas cameo against the Terriers, has been on the cusp of the first team for a while now. Made history as United’s youngest ever Premier League player, and don’t be surprised if Ole uses this game as another chance to look at the teenage starlet. Marcus Rashford, Anthony Martial and Juan Mata have played a lot of football recently and are set to be rested, paving the way for the likes of 18-year-old Gomes.

One of two definite starters for this one. Sanchez needs minutes and Solskjaer will oblige by giving him his full comeback following a brief – but bright – cameo vs Newcastle in midweek. Sanchez was a shadow of his world-class self under Mourinho so I for one cannot wait to the Chilean unleashed afresh with a different manager. Ole confirmed that Sanchez will start in his Friday presser, but we’ll have to wait and see whereabouts he slots in. His favoured position is on the left, and that’s where he played during his 25 minutes in the north east, so expect to see the same here.

Lukaku missed out in Ole’s first two games in charge through compassionate leave but has scored two goals in as many games having been deployed from the bench after losing all semblance of form and confidence in the hapless final months of Mourinho. Just as with Alexis, Ole confirmed that he will hand the hit-and-miss Belgian a start up top as he weighs up his options for upcoming fixtures. Solskjaer said that no one is an automatic starter in his team so Lukaku will have to fight for his place. We know that he’s definitely getting the nod here though. Lukaku has a very good FA Cup record and scored in the third, fourth and fifth rounds for runners up United last season as well as in the quarter-final.