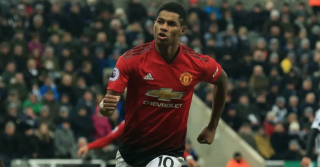 It is incredible to realise that it will be three years ago next month that an 18 year-old Marcus Rashford made his first team debut, scoring twice in a February Europa League tie versus Midtjylland. Three short days later he exploded onto the Premier League scene with another brace against Arsenal. The stars seemed to align for Rashford whose opportunity arose from a Martial warm-up injury, and fans soon watched in anticipation to support the progress of another highly promising ‘Manc born and bred’ in the Reds first team.

Rashford’s progress was marked with a debut goal for England, and very soon he became a regular fixture in Southgate’s re-modelled national team. It seemed that Marcus was on the same stellar trajectory as his illustrious class of 92 predecessors but roll-forward two years and then question marks began to surface during the middle of the Mourinho tenure.

Opportunities under Mourinho became limited and the fluency in Rashford’s performance was negatively affected. Confidence seemed to be on the wane and questions were raised in the media about why England performances were in sharp contrast to his Premier League form along with murmurings about a possible transfer and opportunities to develop faster elsewhere.

However such discussions focussed on Mourinho’s shortcomings with sentiment overwhelming in Rashford’s favour, particularly amongst fans already convinced that he is destined to succeed. Indeed it easy to see that pressure mounted on Rashford as his opportunities became restricted, mistakes would be over-exposed typified by José’s much criticised out-stretched hand gesture towards the stands. It just felt that when Rashford was careless with the ball or missed a good chance, this was a consequence of a player playing in fear rather than for the love of the game.

The last 12 months have seen a flattening in the trajectory of a United starlet apparently constrained by the negative Mourinho style. But with ‘Ole at the wheel’ we have seen a marked improvement in a player that prior to Solkjaer’s return, had scored just three league goals this season but Rashford has now bagged as many in a fortnight. The fluency and confidence has returned, and Marcus in particular is benefiting from the new regime’s policy of tolerance of mistakes in return for grit and determination to get the ball back.

Happy start to the New Year! 🎊

Ole’s at the wheel
Tell me how good does it feel
We’ve got Sanchez, Paul Pogba and Fred
Marcus Rashford’s a Manc born and bred
Du du du du dudu du du
Greatest of English football
We’ve won it all

Rashford and Lingard have certainly put in the hard yards, hunting down defenders and pressuring them against a much higher line. The sublime way Marcus ghosted passed the Bournemouth defence to set up Paul Pogba, typified the change in demeanour of a player now full of confidence and determined to make the most of his talent. Talk now in the media focuses on a change of outlook towards a long-term future at Old Trafford, with possible suitors Real Madrid now seemingly out of the running.

Music to the ears of United fans who can look towards the coming seasons with a renewed sense of anticipation. We have on our hands a tremendously experienced 21 year-old on the cusp of greatness, perhaps akin to the well-placed expectancy during the early part of Ronaldo’s glorious spell at United. There are certainly many parallels, and the goal threat Rashford poses from both free-kicks and open play is certainly reminiscent of the Portuguese. Now is a time for making up for lost ground which in the footnote of history will likely be considered a key moment in the making of another United great.