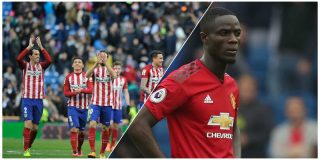 Manchester United may be on the brink of losing Ivory Coast international Eric Bailly with reports in Spain suggesting he could soon return to La Liga.

Bailly fell out of favour under José Mourinho despite impressing in his first season at the club and has so far made one appearance since caretaker manager Ole Gunnar Solskjaer was appointed.

However, the 24-year-old was sent off and handed a three-match suspension last weekend during United convincing win over Bournemouth at Old Trafford. It was a stupid tackle given the Reds had the game won and he needs game time to claim a spot back in the starting eleven under Solskjaer.

READ MORE: Fellaini to be first casualty under Solskjaer with Turkish club set to offer €7.5m to midfielder on 18 month contract

According to Spanish outlet Mundo Deportivo, Sevilla are keen to seal a deal for the United centre-back.

We can only hope interest in Bailly from any club gets knocked back. United haven’t got a range of quality defenders and, on his day at least, the Ivorian is our best.

Victor Lindelof has had a decent season so far, but even he looks more assertive under the interim boss. The Swede could do with a pacey defender alongside him – rather than the ever clumsy Phil Jones – and Bailly certainly fits the bill.

The win over Newcastle saw Bailly sit out the first match of his suspension. Next he will miss games against Reading and Tottenham Hotspur.

The Uruguayan’s current deal expites in the summer and he was the subject of interest from United during the summer, though United failed to make anything happen, as per The Metro.

Things may have planned out differently for Mourinho had Ed Woodward signed one of the best centre-backs in world football. A report from Marca states any chance of the 32-year-old renewing his contract is now “slim”.

Should Man Utd make a January move for Diego Godin?