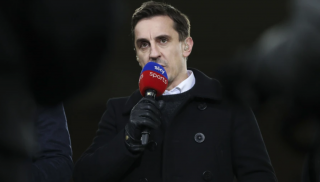 Gary Neville analysed Manchester United’s 2-0 win over Newcastle in the Premier League on Wednesday night and declared his excitement about Marcus Rashford.

The 21-year-old striker scored the winner against the Magpies at St. James’ Park and has been performing superbly under caretaker manager Ole Gunnar Solskjaer.

Rashford played a role in United’s opener when his dipping free-kick forced Martin Dubravka into making a save, but the Slovakian goalkeeper was unable to keep hold of the ball before it bounced in Romelu Lukaku’s path.

The Belgian was only on the pitch a matter of seconds before putting the Reds a goal clear.

“The spring in the counter-attack is there and Marcus Rashford playing up front is fantastic – I love him to bits,” said Neville, as quoted by the official Manchester United website.

“He’s played nearly 150 games at the age of 21 and his potential is enormous. He’s actually now stepping up beyond potential to where he will be a top-class player.

“People will talk about Romelu Lukaku and how he can get back in the team. Don’t worry about that, worry about the kid that’s playing, that’s going to devastate teams.

”Marcus gives the team mobility. They just need more energy up front. He has earned his chance. He gives them something different and he is a fantastic player.

“He is on the right trajectory to become something really special for Manchester United. He was a massive problem [for Newcastle] all night and deservedly won Man of the Match. He was brilliant to watch.”

Lukaku, on the other hand, says life at Old Trafford is “totally different” under Solskjaer as the Norwegian saw his players win their fourth consecutive game.

Solskjaer maintained his 100% record and became the second manager in United’s history after Sir Matt Busby to win his first four league matches, a record which stems since 1946.

Both Rashford and Lukaku revealed they are enjoying work under Solskjaer after Wednesday night’s match.

Lukaku offered some insight into working with Solskjaer, as quoted by The Standard: “It’s totally different. Marcus and I and Anthony (Martial) and all the rest are learning a lot from him, especially on the offensive side.

“You have to be ready, that’s what the manager asked me before the game. I just tried to help the team. I’m really delighted that we have won again and we just have to keep going.”