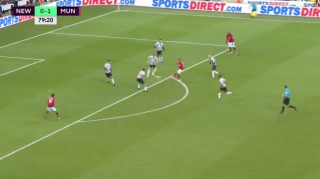 Marcus Rashford has doubled Manchester United’s lead over Newcastle with a smooth finish.

Alexis Sanchez will be credited with the assist after his calm pass inside the box to allow the England international to convert.

It’s great to see our attacking play come together with all of the big names involved.

For too long now, Manchester United has been something of a graveyard for previous top players, though a lot of that could be put down to the conservative managers that were put in place following Sir Alex Ferguson’s retirement.

The first goal was scored by substitute Romelu Lukaku, who was in the right place at the right time after Rashford’s powerful free-kick.