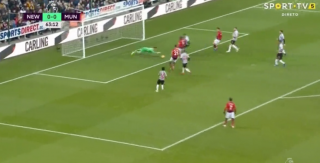 Romelu Lukaku has opened the scoring for Manchester United just seconds after coming off the bench.

The goal came from a Marcus Rashford free-kick which was a tricky one to handle after bouncing. The Newcastle keeper left the ball slip and allowed Lukaku to pounce as he found himself in the right place at the right time.

It is the Belgian who changes the game in United’s favour after months of lacking confidence, and it’s his second goal as a substitute in a week.

How fitting is it for Ole Gunnar Solskjaer to make impact subs like that given his record as a super sub himself.

The goal came after the hour mark and it was needed. The Reds were beginning to lose composure and the Magpies were creating chances.

It may show signs that United finally have a dangerous free-kick taker. He always had it in his locker, but Rashford has really improved on that front. The technique is almost Cristiano Ronaldo esque.

Teams will have to avoid fouling United in and around dangerous areas as a result — which should give players even more space to hurt teams.

Now, Rafael Benitez’s men really need to come out and play to get anything from this game.