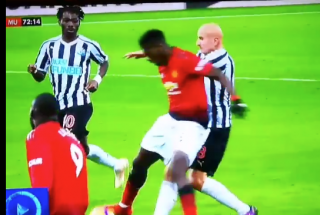 Jonjo Shelvey was very lucky not to be sent off tonight against Manchester United.

The former Liverpool midfielder came on as a substitute for Rafael Benitez and created some dangerous moments for the United defence to deal with.

His past may bring extra drive to Shelvey’s game whenever he faces United, but he lost the run of himself with a horror tackle on Paul Pogba.

The worrying factor is that he escaped punishment when the tackle was worthy of a red card.

Referee Andre Marriner has had an absolute nightmare tonight, so we shouldn’t be too surprised.

There was no attempt to win the ball, as you’ll see in the video below, and it’s a pretty high lunge from Shelvey.

Here’s another look at that horror tackle from Shelvey on Pogba. Shocking that he didn’t even get a yellow card. pic.twitter.com/Gsb60rfbwC