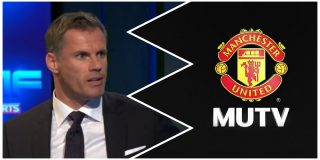 Jamie Carragher made a hilarious appearance on MUTV following Manchester United’s 4-1 win over Bournemouth, but it has not been made clear why the former Liverpool defender was in the studio.

A fan called into an MUTV show, hosted by Mandy Henry, and tore into Carragher for hating United and spitting into the face of a 14-year-old girl, as per The Independent.

READ MORE: Pogba on the verge of equalling Ronaldo’s record against Newcastle

United legend Lou Macari was on the show with Champions League winner Wes Brown. While the latter was trying to hold in his laughter, Macari said he would kill Carragher before the Sky Sports pundit popped his head into the studio.

It was all a bit of fun, though the caller didn’t get to address Carragher after he’d made an introduction. That would have been excellent television.

See the clip below, with all involved having a good giggle as a result.

Utd fan calls up MUTV rips into Carragher about hating Utd and spitting at people. Lou says he would kill him. Carragher pops his head out the door from r/reddevils