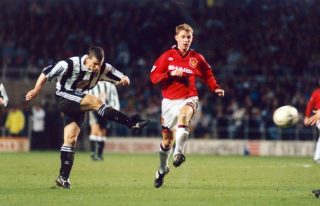 Manchester United’s first game of 2019 is a trip to St James’ Park to face Newcastle United, in what is traditionally a huge Premier League clash.

The first recorded clash between the two sides occurred in April 1895 where Manchester United (then Newton Heath) comfortably beat Newcastle 5-1. However, a week later Newcastle would strike back winning 3-0 at St James’ Park in the old Division 2.

The first FA Cup tie between the sides was an FA Cup Semi-Final at Bramall Lane in March 1909. Harold Hase’s goal for United was all that separated the two sides to send the Red’s to the FA Cup final against Bristol City. United went on to win the cup for the first time fixture.

In 1952, the two sides met in a Charity Shield encounter held at Old Trafford. The exciting fixture was won 4-2 by Manchester United with Roger Byrne, Johnny Downie and Jack Rowley (x2) scoring.

The 1995/96 season was one with a significant competitive edge between the two sides with the Magpies historic title collapse after being 10 points clear at Christmas. However, victory for Manchester United in March 1996 proved crucial as Eric Cantona’s 51st minute goal gave the Reds a vital three points on the way to the title.

The 1999 FA Cup final is seen by many as the most significant fixture of all between the two sides, on the way to winning the Treble, Manchester United faced the Magpies in the vital fixture. An early goal from Teddy Sherringham and second half strike from Paul Scholes was enough for the Red’s to be victorious at Wembley once agin.

November 2002 was a memorable encounter for current caretaker manager Ole Gunnar Solskjaer. This Premier League clash at Old Trafford ended 5-3 with Solskjaer registering a goal and assist. However, it would be Ruud van Nistelrooy who would take the limelight scoring a stunning hat trick.

Most recently, Manchester United and Newcastle competed in a thrilling encounter at Old Trafford. With ever increasing pressure on his back, then manager Jose Mourinho looked to have turned the season around coming back from two goals down to win 3-2 through a late Alexis Sanchez winner.

Manchester United come into this fixture in scintillating form and a strong overall record against the North-East side. Manchester United have beat the Magpies on 85 occasions, lost 42 times and drew 39 times. Solskjaer will be hoping to make it four victories in a row and 86 wins overall against Newcastle United in tonight’s fixture.