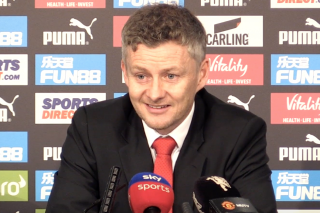 Marcus Rashford appears to have been given a new lease of life under Ole Gunnar Solskjaer.

Not only has the 21-year-old’s performances improved and to better affect, Rashford has made a solid return to the scoresheet.

Caretaker coach Solskjaer has been praised for his influence on the attacking players at United, considering he was one under Sir Alex Ferguson.

The first question in the post-match press conference saw Solskjaer asked about his first clean sheet as United manager but further into the briefing, the Norwegian took the opportunity to praise one of his younger stars.

There are elements to Rashford’s free-kick that have an uncanny resemblance to Cristiano Ronaldo’s iconic set-piece technique. Solskjaer joked that the academy graduate had been taking note of the Juventus star.

The video below, updated by BeanymanSports, shows the full-press conference. He starts speaking about Rashford at the 1.54 point.