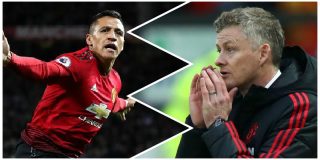 The Reds thought they were getting their hands on one of the best players in the Premier League, who scored 80 goals and assisted 45 in 166 games, but since arriving at Old Trafford, the Chile international has ultimately been a flop.

While he has scored just once in the Premier League this season, Sanchez only scored two league goals during the second half of last season in a United shirt.

Dreadful stats for one of Europe’s top players. It doesn’t make for good reading.

In November of 2018, The Independent published a report which suggested Sanchez had enough of José Mourinho and was unhappy at United as a result. That saw him linked with a move to Paris Saint-Germain, who the Reds face in the last 16 of the Champions League.

How great would it be if Sanchez scored the winner against Thomas Tuchel’s side in the dying minutes?

Although, aged 30, there are fears United are paying a past-it player £350,000 p/w, as per Goal, which would suggest they should find a new home for Sanchez and his two furry friends Atom and Humber.

But Sanchez has yet to play under caretaker manager Ole Gunnar Solskjaer after Mourinho was axed on December 18. This is a fresh start and perhaps the attacking football we’ve played under the Norwegian will suit the former Barcelona man.

United take on Newcastle tonight at St. James’ Park and we might get to see glimpses of the old Alexis Sanchez.

Solskjaer believes Sanchez can be a real asset at Old Trafford. The United boss was quoted by ESPN:

“I think he’s player that would benefit from the interchanging, the rotation, the movement.

“The more chances you create, the more times you get the ball into the final third, he’ll be an asset for us.

“I think he’s looking forward to it. He scored quite a few nice goals [in training on Saturday] so that was encouraging.”