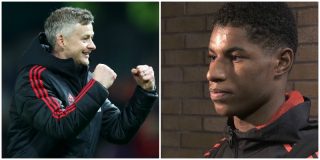 It certainly looks like all of the attacking players at United are buzzing to play under Solskjaer.

Perhaps that is what happens when you’re forced into playing a conservative brand of football despite knowing your strengths suggest an alternative approach works best.

And, that’s exactly what we are seeing under the Manchester United icon.

Rashford was talking to Sky Sports after the match. It was his winning goal that sealed the win for the Reds, with Tottenham away being our next league fixture.

Rashford: “To have those words (from Ole) around you it makes a difference.” #mufc [Sky]

It is certainly encouraging to hear about methods of coaching under Solskjaer as it became evident under Mourinho that players had no idea what to do with the ball in the final third.

Convinced nobody listened to Mourinho towards the end. Convinced everyone listening to Ole now. Him saying he’s told Rashford to pass it in the net is proof of that tonight.