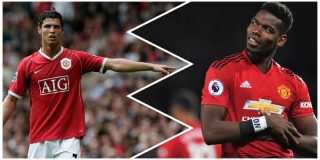 Paul Pogba is just one game away from equalising an astonishing record set by Manchester United legend Cristiano Ronaldo back in 2006.

The Frenchman is in fine form at the moment after netting five goals in three games under caretaker manager Ole Gunnar Solskjaer. He’s finally let the shackles off and is expressing himself further up the pitch.

Pogba assisted against Cardiff City before netting a brace against both Huddersfield Town and Bournemouth as 2018 concluded.

And, if the World Cup-winner can bag another two goals against Newcastle on Wednesday night he will match Ronaldo.

Ronaldo completed the feat by netting three consecutive braces in 2006 against Aston Villa, Wigan and Reading.

After falling out with former manager José Mourinho and performing under par since re-arriving in 2016, Pogba’s future has been uncertain for some time, though now it looks like his form should convince United to fight for their most valued assist in the dressing room because he’s finally backing it up on the pitch.

Pogba appears driven to prove a lot of his doubters wrong and long may that continue if we’re to get the best out of him.