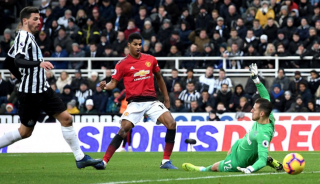 The Reds firmly kept up the pressure on the top four as we moved to within six points of Chelsea and the Champions League places after a gritty and hard fought win at St James Park. Solskjaer is restoring the equilibrium and we saw a different side of his new United. Here, we run the rule over the men in the red as we emerged with another win from a tricky trip to the north East.

Did little wrong, two good saves from the lively Christian Atsu in the first half. Fine. Managed to preserve a rare clean sheet. Troubled on occasions but generally comfortable.

Plenty of players improving under Solskjaer but doubt Antonio Valencia is going to be one of them. I know he’s been injured but looks like he’s had his day. Been a fine servant but offers nothing any more, surely his last season in the Red of United. One dimensional and not good enough either defensively or going forward. Poor.

A crazy first half minute encapsulated the Jekyll-and-Hyde Jones in a nutshell. Gifted Salomon Rondon a clear opening when he miss-controlled a pass to play the striker through only to redeem himself moments later with an excellent last ditch challenge. Clumsy and chaotic. Another who is not good enough, he gives me and I’m sure many others palpitations with his harum scarum showings.

Solid alongside Jones. Kept the impressive and in-form Rondon quiet. Did little wrong but stuck to his task and performed well when called upon. Quietly went about his business again in the heart of the defence.  With Chris Smalling and Marcos Rojo with Eric Bailly suspended, he and Jones will continue in defence for the foreseeable future. Booked.

A middling performance from the steady United left-back. Has tailed off a little after a sizzling start to the season but still done more than enough to prove he should be our regular full-back. Could offer more in attack. Not his best night and struggled at times against Atsu. Booked late on.

After glimpses of improvement under Ole in recent weeks, Matic reverted to type in a Mourinho-esque performance. Slow and ponderous, he was disappointing on a night when United had to dig in and grind out the win against an organised and obdurated Newcastle side.

Bustling and busy as ever. Had become a key man for Solskjaer and has added end product to his game under the Norwegian. Combative at St James Park, put himself about and did a solid enough job against a dangerous Newcastle midfield.

The man of the moment. Has been a player reborn under Solskjaer with four goals in two games. Didn’t have quite the same effect here but still kept on trying to make things happen and had a couple of efforts from distance. Played a part in the second goal and did his job on a night when no one really stood out.

Struggled. The combination with Antonio Valencia on the right promised much but offered little. Mata hugged the touchline and will never be at his creative, string pulling best out there. Deservedly hooked just after the hour mark as United chased the winner which eventually came a minute after he was taken off.

This lad’s confidence dipped alarmingly in the latter days of José Mourinho’s tenure but Rashford is a man in red-hot form right now. Continued his hot streak in front of goal to make it three in four under Ole and it was from his free-kick that Romelu Lukaku scored the opener. Solskjaer’s tactics have undoubtedly contributed to Rashford’s run, and he is flourishing by playing on the shoulder and not as a target man. Excellent and took his match sealing strike well. Man of the match.

Some quality moments. Flitted in and out of the game and got taken off as part of United’s double 63rd-minute substitution. Never really took the game by the scruff of the neck. Could have done more.

Ole knows a thing or two about substitutions, and for the second game in succession Lukaku scored with his much-maligned first touch, just a minute after he came on. He followed up a Rashford free-kick from close range and has looked notably leaner since Solskjaer took charge. He was involved in the second goal too in a sweeping team move finished off by Rashford.

Good to see him back as he works towards full fitness. Straight into the thick of the action as he teed up Rashford for the second goal late on. Can’t wait to see what he can offer under a new manager and free from the stranglating shackles of the Jose Mourinho era.

Surprisingly omitted from the XI and only given a fleeting cameo as he came on to put himself about in the closing moments. No opportunity to do much.