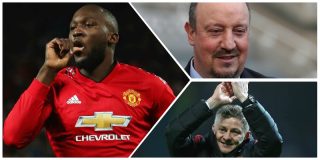 It seems the mojo has returned to the red half of Manchester after barely two weeks under Ole Gunnar Solskjaer. However, football’s festive season is far from over, as Manchester United aim to extend their run of three consecutive wins to five with results over Newcastle and Reading. Squad depth will prove important over the next two matches to keep key players fit for next week’s crunch clash with Tottenham Hotspur.

Expect plenty of rotation over the weekend, with key players getting minutes against Newcastle. Achieving the same brand of attacking football with rotated sides could be vital as Solskjaer attempts to reverse the poor first half of United’s season that ensued before his arrival.

Even the Spaniard between the sticks seems to have benefitted from United’s managerial change, as seen by notable improvements in his distribution. He won’t be displaced as he looks for the clean sheet he deserves.

Antonio Valencia seems to have been exiled from the side, the manager stated that, as per The National, Matteo Darmian is currently needed as an emergency centre-back, and Luke Shaw could use a rest after seemingly picking up a knock late against Bournemouth.

This paves the way for teenager Dalot to start the next two matches, where he will be looking to continue his steady development and become more comfortable in English football.

Lindelof has been superb recently, and he will be much needed in defence for the Spurs showdown next week. Right now, though, given the absences of three senior defenders, he is also likely to play against Newcastle on Wednesday.

After that, the Swede should sit out of United’s FA Cup tie with Reading.

Given his injury record, it comes as a surprise that Jones is one of the defenders available to play against Newcastle. He has been effective in his last few appearances and more of the same will be sought after from the 26-year-old.

Young’s performances under Solskjaer have only lacked end-product, and perhaps playing him on his natural left side will change this. He plays on the left here due to the lack of options, though, and is expected to move back to the right side for the Tottenham clash.

There will rightfully be plenty of calls to rest Matic, but there are few alternatives to the Serbian in United’s current side. Should he miss both this match and the tie this weekend, it would leave too big a rest between his previous display and the Spurs outing.

He has been solid in the last three matches after a series of dire performances under Mourinho, and any hopes of beating Tottenham will involve his presence. The Serbian’s absence this weekend could also pave the way for James Garner or Scott McTominay to debut under Solskjaer.

Herrera has silenced his doubters with three excellent cameos in the last three, breaking forward from midfield to add attacking impetus to the side while also adeptly covering for Paul Pogba and enabling the Frenchman’s brilliance. Like Matic, the Newcastle match will keep him ticking over.

Arguably the standout performer in each of United’s last three matches, Pogba will be looking to achieve the same in a fourth consecutive. The Frenchman has scored four and assisted three in his first three matches under Solskjaer.

Brazilian compatriots Fred and Andreas Pereira could use a match against slightly weaker opposition this weekend to help them integrate into the side. Both have immense talent but have struggled for minutes this season after playing outside England for the last few campaigns.

Jesse Lingard has worked tirelessly for three straight matches and looked sloppier and more fatigued in the latter, leaving Mata to start against Newcastle. Mata may be more suited to playing in the centre but is currently needed to fulfill the numbers out wide. Alexis Sanchez is unlikely to be thrown straight into the Premier League and could feature off the bench.

Starting Lukaku against Reading would have been ideal given the Belgian’s lack of confidence, but Marcus Rashford’s knock in the last match should guarantee the rest that the Englishman deserves. Lukaku will still relish the prospect of starting against Newcastle and should be a great threat to the opposition.

Rested with illness on Boxing Day, Martial returned in style over the weekend and will continue smoothly at Newcastle.