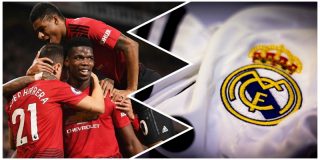 According to The Sun, Marcus Rashford is set to snub any offer from Real Madrid in order to remain at Manchester United thanks to caretaker manager Ole Gunnar Solskjaer.

Back in November, The Sun claimed that the Spanish giants showed interest in signing the England international.

Rashford, at the time, was probably open to negotiations with Madrid. His starting role became limited under former manager José Mourinho and he has was being used on the left flank as opposed to now with Solskjaer preferring him as a centre-forward.

Of course, that means he will be up against Romelu Lukaku for a regular spot in the team but that shouldn’t stop Rashford. This is part and parcel with being a centre-forward at the biggest club in the world.

Rashford has scored twice in the last three games under Solskjaer and has been working his socks off.

It’s also clear that he is enjoying his football again, perhaps because like under Gareth Southgate, Rashford is being allowed to express himself again.

Next up for Manchester United is Newcastle in the league. While Rashford limped off during the 4-1 win over Bournemouth, he is expected to feature against The Magpies on Wednesday evening.