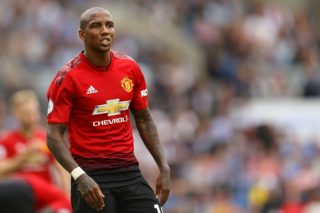 According to an exclusive from The Mirror‘s James Nursey (@JamesNursey), Inter Milan are considering a shock move for Manchester United’s Ashley Young.

The Italian giants aim to snap the veteran up on a Bosman and Youngy is permitted to negotiate a pre-contract agreement from January 1 with any club outside England as he is in the final six months of his current deal.

Inter’s apparent willingness to sign Young comes as a surprise, unless manager Luciano Spalletti plans on using the United star in a different position to left-back. The Milan club signed Kwadwo Asamoah from Juventus during the summer and the Ghana international has been played in that role.

Meanwhile, The Mirror also claims that United are in talks with Young and are hopeful of tying the former England international down on a 12-month extension.

Losing Young wouldn’t be the biggest blow to United, though he may have more importance in and around the dressing room as a model professional. The former Aston Villa winger has become a full-back in his later years at United, with José Mourinho initially preferring him to Luke Shaw at left-back.

However, that changed this season and now Shaw is getting more football than the 33-year-old. And, given his age that’s the way it should be…

Inter are not the only Italian club said to be chasing Young’s signature. The report from The Mirror also names AS Roma as an interested party.

Young has made 222 appearances for United and ideally wants to stay at Old Trafford for another season at least. Elsewhere he won 39 England caps but has not been selected since the World Cup, with Shaw taking his spot again in Gareth Southgate’s side.

This, of course, is a player who has captained United this season.