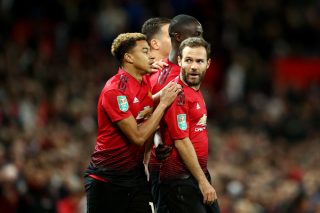 Manchester United have ended 2018 strongly with three consecutive wins, with Juan Mata reflecting on that much in his weekly blog. The playmaker also hopes the new year can bring happier memories than the last, presumably aiming a dig at his former manager José Mourinho.

The Spaniard has yet to get a run in the team under caretaker manager Ole Gunnar Solskjaer but there is a good chance the Norwegian will hand Mata a chance in the coming weeks. His creativity won’t go ignored under Ole.

Some weeks this season after bad results, Mata chose to abandon his weekly blog because words appeared meaningless to the former Chelsea playmaker. He now speaks about how the three wins on the trot helped everyone at the club to enjoy Christmas.

READ MORE: Pogba speaks about differences between Solskjaer and Mourinho

Mata wrote the following for his blog: “The win against Bournemouth on Sunday, our third in a row, helped us all to enjoy a great Christmas period. There are a lot of games in a short space of time and it isn’t easy to manage them, but I believe we are playing at a high level and the results are coming.”

The mood around the club became toxic under Mourinho. So bad that Ed Woodward intervened before a plan was in place to, though losing to Liverpool that way an Anfield was also deemed unacceptable and rightly so.

Solskjaer’s appointment gave the impression his job was to unify the dressing room.

However, with top four now looking at least achievable, the mood around Old Trafford has improved drastically. Even Paul Pogba has performed impeccably in our previous three fixtures.

The fans are happy too, and Mata has noticed that: “Ending 2018 with two wins (three?!) has been very positive, as we can feel that the fans are happy and hopeful again after going through some understandably frustrating moments over the last year. We are Manchester United and we have to demand ourselves to perform at a high level because that is what the history of our huge club dictates. We can’t settle for less. As in life, it is clear that there are some happy moments and others that aren’t so, but I am optimism and convinced that the new year is going to bring us positives.”

The unhappy memories in the past 12 months probably stem from Mourinho’s dour demeanour and Mata probably feels Solskjaer and the next manager will at least get the players and fans going by playing expansive football.

Well, we can hope anyway…