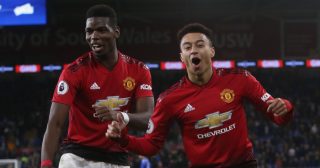 Jesse Lingard has spoken on behalf of pretty much everyone when he says he is now seeing the Paul Pogba he “used to know” as Manchester United continue to improve under Ole Gunnar Solskjaer.

Pogba has four goals in three games under Solskjaer, having scored his second brace under the Norwegian coach in Sunday’s 4-1 win over Bournemouth at Old Trafford.

The midfielder didn’t see eye-to-eye with former manager José Mourinho but has played a major role in United’s resurgence under Solskjaer.

Lingard, who came through the academy wit Pogba, believes the Frenchman is enjoying his football again because he is playing in his preferred role.

“He’s [Pogba] enjoying his football,” Lingard told The Independent. “He’s playing in the role he likes to play in, just inside off the left.

“Ole has helped him 100 per cent. He has given him the confidence and license to be free and play his fame and do what we know he can do.

“I can definitely, definitely see the Paul I used to know. I have seen him playing through the ranks and he is back to that player, the player we know.”

Solskjaer has made an instant impact at Old Trafford with three wins on the bounce.

Some will claim ‘United have not played anyone yet’ to belittle Solskjaer’s achievements thus far, but United have struggled to beat the league’s fodder over the last year. The difference now is we’re winning games against these sides before leaving the tunnel.

We can only imagine how hard a watch this will be for Mourinho. He couldn’t change his ways to get the best out of his players and that led to the inevitable axe. The Special One only has himself to blame, even if the board should have done more to back him in the summer.

But we’re in for a good 2019 if Lingard, Pogba and co can continue expressing themselves…