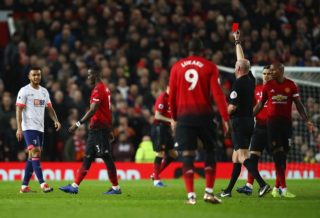 All may appear rosy in the Old Trafford garden once more, but as ever, Manchester United rarely do things the easy way and there remains work to do for the team and interim boss Ole Gunnar Solskjaer. Here are three blots on the copybook we saw during United’s win over Bournemouth.

From the moment the rejuvenated Paul Pogba put us ahead in the fourth minute, this never looked like anything other than a routine win for the Reds. If not for Nathan Ake’s headed finish on the cusp of half-time, it would have been almost perfect for Ole Gunnar Solskjaer’s United. David de Gea and clean sheets used to be a marriage made in heaven, but the Cherries goal ensured that United’s defence was breached once more, and it’s now only five shutouts from 27 ties in all competitions throughout 2018-19. Against Bournemouth, it does not matter but Solskjaer must focus on defensive discipline and organisation if he is to keep our renaissance going. The likes of Spurs will not be so forgiving.

Bailly is a player I rate highly. I still think he is our best defender –  he’s strong, reads the game well and is quick – there is a lot to like about our Ivorian. Exiled under Mourinho, he was brought back for the first time since Ole took charge. He would not have done his long term chances any favours with a late red card for scything down substitute Ryan Fraser. It was needless, with United 4-1 up and in cruise control. But Bailly cannot help himself, he is rash and needs to learn quickly. It will be difficult for him to nail down a regular place when he’s either injured or suspended. A worry.

Reds undercooked for hurdles ahead?

For all of Solskjaer’s good work as he oversees a Reds renaissance, the fact remains that United have ‘only’ beaten Cardiff, Huddersfield and Bournemouth – two sides who are favourites for relegation and another who, although dangerous and gifted, are out of form. With all due respect, United should be beating these sides anyway. It can be said that we have not yet had a true test of credentials – the trip to Wembley to face Spurs looks to be the first examination of this side’s refound form under the interim boss on the 13th January. With Newcastle and Reading before then, the worry is we’ll be undercooked for the challenge that Mauricio Pochettino – maybe a United manager in waiting – and his men will present.  The second half of 2018-19 is the litmus test.  United remain a side with flaws – there is a long way to go and plenty of work to do.