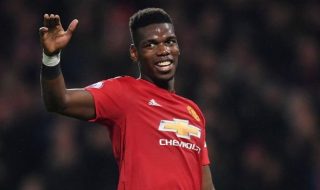 Albeit against lesser opposition, Manchester United are on an impressive run of three consecutive wins. The most recent coming on Sunday over Bournemouth – a 4-1 thrashing – with only Paul Pogba was singled out for the BBC’s team of the week.

Whatever your opinion of Pogba during his time under Mourinho something has changed. Fans and former players have been critical of the Frenchman since he returned from Juventus in 2016, but we’re finally starting to see consistency from the man we bought to threaten the opposition and United are looking stronger as a result.

Garth Crooks doesn’t reference Pogba’s hairstyle (for once) when giving his reason for picking Pogba, as per BBC Sport.

“Paul Pogba is looking like a leader as well as a player. I said a few days ago that if he listened to top former players more his game would benefit. I don’t know who he is listening to at the moment but it seems to be working. His performances over the Christmas period have been nothing short of outstanding. The question now is, can he keep it up?”

Pogba, in this form, is a contender for Ballon d’Or awards but the true test for everyone is when Solskjaer’s men face a tough opponent. Tottenham away is three games away so there’s still time to prepare.

In these games, Solskjaer’s tactics will change because going toe-to-toe with Spurs may result in leaving our questionable defence exposed. We can still have a go at these teams but perhaps not in the same manner we’ve recently approached teams like Cardiff City, Huddersfield Town and Bournemouth.

You could say Solskjaer has had an easy start but his players can only face the team’s put in front of them. Tests will come and we’ll soon see if Pogba is ready for the occasion.

It’s certainly promising to see the French midfielder constantly looking to make dangerous runs into the opposition box. And, every team will now try their best to put a stop to his goalscoring form.