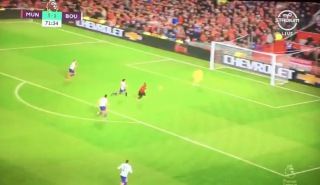 Romelu Lukaku made an instant impact from the bench when Ole Gunnar Solskjaer called upon his Belgian striker to replace Marcus Rashford in the second-half against Bournemouth.

The scoreline is currently 4-1 in United’s favour, with Paul Pogba netting a first-half brace and Rashford scoring before the interval.

Caretaker manager Ole Gunnar Solskjaer could not have asked for a better start as Manchester United boss.

READ MORE: (Watch) Rashford gets in on the scoring against Bournemouth after brilliant Martial assist

The Reds are on course to win their third consecutive game and Solskjaer called the right substitute at the right time, with Lukaku scoring on his return to the team.

That goal should do him the world of good as his confidence became shot this season under former manager José Mourinho.

It all came from a superb through ball from Pogba, adding to the Frenchman’s tally of assists this season.

Watch Lukaku’s goal below, as it trickled in past the Bournemouth goalkeeper.