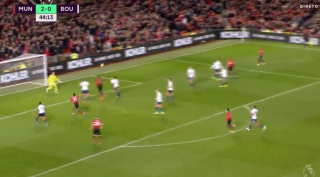 Marcus Rashford makes it 3-0 at Old Trafford after a first-half brace from Pogba Pogba.

It’s finally starting to click for the Reds after a terrible start to the season. It took sacking José Mourinho and hiring Ole Gunnar Solskjaer as caretaker manager to change things for the better.

For the third goal Anthony Martial did brilliantly on the right to swing a lofted ball into a packed box. It flew over Pogba, who was searching for his hat-trick, but found Rashford before hitting the net.

It looks like another three points in the bag, however, Bournemouth did pull one back before the break to make it 3-1.

United should still have enough to claim another win under Solskjaer.