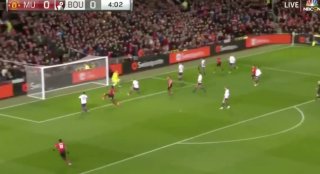 What a goal to open the scoring at Old Trafford.

Paul Pogba breaks the deadlock early on following a great piece of skill from Marcus Rashford.

The Frenchman made his run in between full-backs and centre-backs while Rashford destroyed Ake out wide on the right flank before sending a low cross into the box.

That sees United take the lead early on with the scoreline currently 1-0 in our favour. It also means Rashford has picked up more assists already this season (6) than any of his previous campaigns in the first-team.

As Jamie Carragher said on commentary for Sky Sports, “That is Manchester United!”

This continues to show how good these players are when given freedom to express themselves.

Hopefully, the Reds keep this up and claim all three points to make it three wins from three.

Watch Pogba’s opener below as he makes it three goals from as many games under Ole Gunnar Solskjaer.