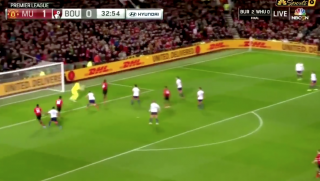 The Frenchman cannot stop scoring at the moment after his first goal gave United the lead early in the first-half.

Now, he doubles United’s lead with a header following a superb cross by Ander Herrera, with Ashley Young also playing a part on the right flank.

Pogba has been terrific again this evening – constantly looking to make dangerous runs into the box and hurt Bournemouth.

It’s the sort of performance the club expected to see regularly when Pogba returned from Juventus in 2016, and finally under Ole Gunnar Solskjaer it’s starting to click into place.

If he can continue this form between now and the end of the season, Pogba could drive United back into the top four.