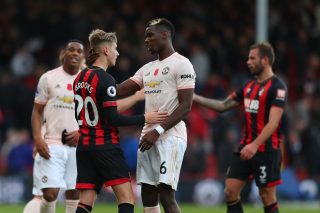 Manchester United face a tough task against Eddie Howe’s AFC Bournemouth side who have continued to defy expectations this season.

The Dorset side, traditionally have played in the lower reaches of the English professional football pyramid. However, this does not mean the fixture does not have a long history within the cup competitions.

An FA Cup fixture in January 1949 would be the first time the two sides faced. This fixture would in-fact be the heaviest defeat for Bournemouth (then named Bournemouth and Boscombe Athletic) with a 6-0 scoreline recorded. Goals from Charlie Mitten, Stan Pearson, Jack Rowley (x2) and Ronnie Burke (x2) would prove too much the South-Coast side.

READ MORE: Solskjaer’s quest to get the best out of Sanchez and Lukaku starts now

Arguably the most famous meeting between the two sides came in January 1984, with Bournemouth playing giant killers beating Manchester United 2-0 at Dean Court. The FA Cup fixture would be where a young Harry Redknapp would be put into the limelight for the first time in his career. Bournemouth who were competing in the then Third Division beat a Manchester United side which included the likes of Bryan Robson and Ray Wilkins.

A year later, United would be able to avenge this defeat as the two sides were drawn to face each other in the FA Cup once again. Old Trafford would host a 3-0 victory for the Red Devils with Gordon Strachan, Gordon McQueen, and Frank Stapleton netting to send Manchester United through to the fourth round.

Prior to 2015, Manchester United and Bournemouth had never competed in the same league, following a stellar Championship season in 2014-15, this would change.

In the first league meeting between the two sides, Manchester United, under the stewardship of Louis van Gaal would fall to defeat 2-1. Following an “Olympic Goal”, directly from a corner by Junior Stanislas, Manchester United would be embarrassed on the South-Coast as former academy product Joshua King put the game to bed.

The most recent league meeting between was far more positive for the Red Devils. After a poor start with Callum Wilson netting on the 12th minute, Manchester United would bounce back with a leveller through Anthony Martial with a well placed finish in the 35th minute. Marcus Rashford would be the hero netting in stoppage time, which looked to keep José Mourinho’s job safe for the time being.

United boast a significantly positive record within this fixture with 10 wins, Bournemouth have two and there have been three draws. Ole Gunnar Solskjær will be hoping to make it three wins from three this weekend and boost this already positive record against the Dorset club.