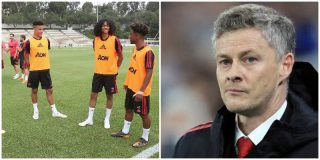 Solskjaer answered a question about Angel Gomes ahead of United’s home fixture against Bournemouth after being included in his recent matchday squads and featuring against Huddersfield Town.

That’s an all-mighty boost for any youngster to be called into the Manchester United first-team matchday squad, and Solskjaer is doing his utmost to unify the dressing room again. By introducing more youngsters to the frame he will achieve that as far as us fans are concerned.

It shows he knows all about United’s traditions regarding homegrown players.

The Norwegian coach broight Gomes on from the bench in the win over The Terrriers. He believes the youngster is ready to make an impact in these games.

“Of course [I want to involve youngsters], because that sends a signal to the boys that ‘you are close’, because they are,” Solskjaer told the official Manchester United website.

“They’ve done really well in training. When you get the chance to put a player out there for 15 minutes at Old Trafford to give him that experience, Angel was, of course, the one I wanted to put on. And we probably would have still done it if we’d needed a goal, as well, because he’s that sharp.”

That’s high praise for Gomes and it certainly gives the impression that we’ll be seeing more of him soon. Whether that’s today against Bournemouth or another time, you’ve got to be happy to see the club’s youth get more chances in the first team.

José Mourinho may have brought Scott McTominay through but many have come to the conclusion that he won’t be a United player in the near future due to lacking in quality or making a difference in games. Gomes, on the other hand, has a spark about him and should be able to change games in a positive way.