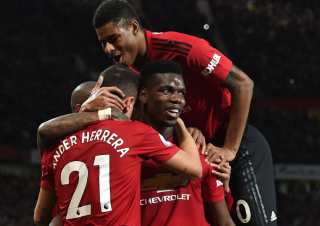 David de Gea – Was rarely called upon, made saves that you would expect the Spaniard to make, a routine day at the office. 5

Ashley Young – A good performance, deliveries were always a threat, a poor challenge in the first half potentially could have seen harsher punishment on a different day. 6

Eric Bailly – The better of the two centre halves before his sending off. Was no nonsense and powerful in the challenge but that is what ultimately cost him. A great block to stop Josh King beforehand.  4

Victor Lindelof – Not his best day in a Manchester United, struggled with crosses, lost Ake before his goal. A poor clearance hitting Shaw which resulted in a Bournemouth chance. 4

Luke Shaw – A tidy showing from the England man, a useful outlet going forward and defended with real strength. 6

Nemanja Matic – Seemingly turned around his Manchester United career in recent weeks, far more positive in possession, however, he did lose his marker on a couple of occasions. Out-jumped by Ake for the Bournemouth goal. 5

Ander Herrera – Did the dirty work brilliantly, most notably a covering run in the first half. A great assist for Pogba’s second goal. A brilliant balanced midfielder performance. Booked and substituted. 7

Paul Pogba – Looking unstoppable in a Manchester United shirt, another couple of goals, simply faultless going forward. Unlucky not to get a hat-trick due to a brilliant Begovic save. 10

Jesse Lingard – His ever present energy is something crucial to the current system being played, but a quiet day in terms of chances. 6

Anthony Martial – Returning to the side after a brief illness, created the third goal with a great run in behind and scooped cross. Substituted. 7

Marcus Rashford – Created the first goal with a spectacular driving run and cross and went on to score the third. Excellent performance once again. Substituted as a precaution. 9

Romelu Lukaku – An instant impact albeit offside, scored with one of his first touches on his weaker foot. Powerful runs in behind, great to see him play with confidence again. 7

Andreas Pereira –  Some nice work but only had fifteen minutes or so to make an impact which was not helped by Bailly’s red card. 5

Phil Jones – Subbed on due to Bailly’s red card for the closing stages. Had very little to do. 5