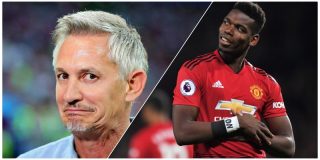 BBC pundit and former England international Gary Lineker was full of praise for Paul Pogba after his performance against Bournemouth in the Premier League on Sunday.

Ever since caretaker manager Ole Gunnar Solskjaer replaced José Mourinho over a week ago, the players are expressing themselves better and playing a more attacking brand of football.

With that in mind, United’s attacking players have really come out of traps. Not just Pogba but Marcus Rashford, Anthony Martial and Jesse Lingard.

It would be unfair to suggest all of the players mentioned above downed their tools under the previous manager. Instead we should look at United’s new approach under Solskjaer and how the Norwegian is getting the best out of his players.

See his two tweets below re: Pogba…

Same applies to @paulpogba. Even though players will never consciously not try, however much they may hate the manager, the improvement that comes with contentment both on and off the field makes a marked difference.

Magnificent performance from @paulpogba in this game. Not only has his passing been divine but he looks a constant threat now that the shackles are off this @ManUtd side.