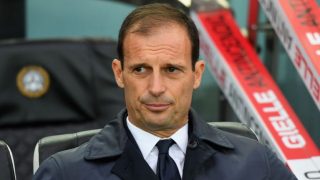 With fresh reports from ESPN linking Massimiliano Allegri with a move to Manchester United, it is clear that another man could well have joined the long list of the next possible boss at Old Trafford.

While Allegri is one of the best managers in Europe right now; someone who manages the best club in Europe today, but that doesn’t mean he will fit in at United. Just because a manager is recognised and renowned across Europe doesn’t mean that he should be appointed as the United boss. And not every manager who is renowned will work out at United, recent instances have proved.

Allegri may not have the personality like that of José Mourinho; he is someone who relies on pragmatism and managing games a lot of times. The way it has panned out for him at Juve a lot of times has been massively effective and impressive. It sometimes feels as though the way the game is supposed to pan out is written inside the canvas of his head. It seems as though he and his sides plan how to go about the game well before it, when its Allegri’s ability to manage games and dig out games that seem tough on paper.

READ MORE: The upwards turn in the tale of Paul Pogba, and the lessons it teaches

Juve’s recent win over Roma, last season’s win over Napoli and eliminating Tottenham from the Champions League last season probably define the kind of manager Allegri is at his best. Against Napoli and Roma, the bianconeri went a goal up and managed the game from there on to perfection, winning 1-0. Against Spurs, they went a goal down at Wembley, but stayed in the game for a long time. Two moments in the second half saw them score twice and they managed the rest of the game to perfection.

And while it is clear that Juve’s and Allegri’s ability to see out big and crucial games are undoubted, but Manchester United are a club that need a breath of fresh air after five years of being sold the promise of playing the ‘United way’. It hasn’t really happened. From the negative football under David Moyes, via the meaningless possession football of Louis van Gaal to a brand of football that shackled the players under José Mourinho, the club is crying out for a progressive manager. A manager who brings to the plate an attractive brand of football.

That is the reason why the way United are playing under Ole Gunner Solskjaer is something that is striking a chord with the club’s fans across the globe. It is reminiscent of how the club used to play under Sir Alex Ferguson. It is expansive and attractive.

The brand of football the Italians stick to at Juve is pragmatic and result oriented. They won’t play attractive football and they won’t attack until it is necessary. After going a goal up, they will defend deep and they will dig results out. They will play on the counter and will bring an extra defender on to defend the lead till death.

It may not be as drab as United were under Mourinho, but it can frustrating and dull. For a club like United, that has suffered enough of that and has endured enough from managers’ tendency and preference to grind out results instead of still attacking when the side is a goal up, Allegri will never fit in. After a point, he will assume the form of someone who is taking the life away from the fans and the club. And the more concerning fact for United fans will be that Juve play that way when they have arguably the best side in Europe today.

Another thing that stands out at Juve and how Allegri has been so successful is the recruitment. The manner in which Fabio Paratici and former CEO Beppe Marotta have ran the club, making shrewd signings at every possible chance, a lot of Allegri’s success has been down to how they have helped him too. Be it the signing of Sami Khedira for free, the bargain buys of Andrea Barzagli and Giorgio Chiellini, the capture of Paulo Dybala, the signing of Juan Cuadrado and basically just the way they have signed players- it seems to gleam of how good the club has been running. The way this season has gone makes one question as to how the Bianconeri signed Mario Mandzukic for a fee of €19 million, as per Bleacher Report.

Allegri did win a Serie A at AC Milan back in 2011, but his Rossoneri side was now way close to how the Juve side is. That is largely down to the poor financial situation that ensued at Milan and how Paratici and Marotta have helped him in recruiting shrewd signings.

At United, the financial situation is certainly secure, but as things stand, there is no guarantee of quality recruitment. Allegri has a say in whatever players he wants and whatever players fit into his system and needs a certain amount of freedom for that. It remains to be seen whether that will be the case at United, with a sporting director yet to be roped in.

It isn’t to say that Allegri is a bad manager. But the demand on managers at clubs like United is something different to what he offers. What he brings to the table is pasta when Manchester United are yearning for is pizza.